In today's day and age of digital photography, the darkroom is just a click away. Back in the day, photo retouching was left to those who could afford the real estate for a darkroom, along with all the equipment and chemicals required to develop one's work to a level of perfection. Boy, how things have changed. 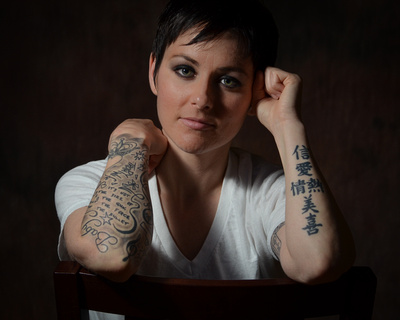 All photographers today do some level of touch-up work. If they tell you otherwise, they're either lying, or the quality of their work is in question. Heck, even Ansel Adams touched up his shots in the darkroom, and was well known for changing the contrast of his work with dodge and burn (lightening and darkening areas of the photo).

Sure, sometimes there's very little to be done, like this sample from a tattoo shoot done this past year. Everything came together on this shot: the model posed natural, the lighting, simple and Rembrandt (high angle down on the model's right), lit up her body art while casting just the right shadow across her face to give an edgy kind of look. The background wasn't lit, giving a nighttime kind of feel. But even with this shot I did some minor touch-ups, enhancing the eyes just a tad to draw attention to the personality of the subject (something I commonly do in all portrait shots).

But sometimes things don't always work out quite so well. All of us are prone to mistakes from time to time. Perhaps we didn't have the white balance set just right, maybe there was too much light on the subject or background, or perhaps there were some posing problems. It happens to the best of us, and no one is immune from a photographic mishap at least every once in a while.

For instance, take a look at this shot of Marci, who had it all going on during her shoot: the sun was low on the horizon, wind was blowing her hair, and a reflector held nearly in front of her helped to light her face nicely. Great! But, there was one problem during this shoot: Marci took great direction from me...too great though, and I flubbed up some photos. Luckily, not all was lost.

People will often say, "I don't look good in pictures", feeling that every photo snapped of them has Quasimodo written all over it. That, believe it or not, is also the case for any model...ANY MODEL! None of us look 100% at all angles, which requires nuances in posing techniques that can bring out a person's best features, hide others, and reveal their best light. Marci, as gorgeous as she is, fell victim to a few photo faux pas of her shooter: me.

While it can be painful to admit mistakes, I'll be the first to step up to the plate, bow my head, and show my shame. Heck, if I tried to argue my point (Yeah, that's what I intended! No, really, that shot is supposed to look like crap!), my clients would think I settle for the mundane, or worse, mistakes. Below is a prime example, showing my mistakes, and how I corrected them:

Marci took my direction when I told her to cross her arm over her body. Unfortunately, she laid it flat, and after I snapped this shot, I realized I forgot to tell her to raise her elbow slightly (arms should ALWAYS be away from the body to enhance slenderness). The result, a larger arm, flattened against her body, looking too large. Also, with Marci being slightly taller than me from where she was standing, she had to look down at me, thus widening her face as she smiled (faces turn slender when looking up slightly). And, to make matters worse, I had slightly underexposed the shot with not enough emphasis on the mask of the face (ARG! What was I thinking!). Still, as shown by the shot on the right, it was all fixable.

For the touch-up done above, I first used Adobe's Lightroom software to get the lighting right: upping the exposure a tad and enhancing the blacks and contrast. I use an IPS monitor, that is color calibrated, so I what I see is what will print. That's the easy part: I corrected the exposure, and placed a slight exposure (with a brush in Lightroom) on Marci's face, while adding slight vignetting around the photo edges to enhance a spotlight effect further. So far, so good. But what does one do about that bulgy arm and widened cheeks? That got a little trickier.

To fix the arms and wide face, I exported the photo from Lightroom into Photoshop. From there, I simply used the Liquify filter. This allows me to stretch, pinch, or bulge areas of the photo. It has to be done softly, and accurately. Overdoing it will make any subject look unnatural. And, in the case of portrait photography, most everyone wants to look their best, but still themselves.

Below is yet another example of first using Lightoom to set the exposure, then using the Liquify filter in Photoshop to thin things up:

Working against a quickly setting sun, I was racing to get in the last few shots of the shoot (we were already an hour in, tons of shots, but I just couldn't stop...and Marci was still rarin' to go!). I didn't bother to grab a flash and throw some light on Marci's face; instead, I just kept shooting. This shot was tack sharp for focus, great composition, and a nice look for Marci as well. But, the face is slightly underexposed, and I once again had her arms too close to her body. And, with Marci angled in this particular pose, her cheeks were just a tad on the wide side (her shoulders were shrugged slightly, squashing her face to her neck). I decided to go for broke and turn this into a full-blown glamour shot. I used the same techniques as in the other shot above, but here I used a bit more high-key lighting on her face, and went to town with the Liquify filter in Photoshop to really thin out her face. I even went nuts and pinched her nose a bit with the Liquify filter, and widened her eyes a tad with the bulge brush in the Liquify filter as well.

Sometimes things all come together, the planets align and things are picture perfect (literally). Sometimes though a little help from software can save what would have been a throw-away pic. The best advice for any photog is to get your shots as perfect as possible when you're shooting, and don't rely on post processing to fix laziness or ineptitude. After all, no one wants to sit around for hours fixing pictures; instead, it's far more profitable to get photos through your workflow as quickly as possible. But, when things don't go quite as planned, there is a back-up solution, when all else fails.