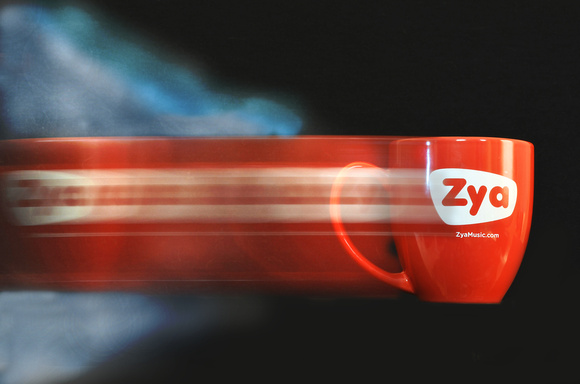 Lights are the primary paint used in photography. Light illuminates the subject, and shadows tell their story. I LOVE using lights. Sure, it may be easier to shoot outside, but you're at the mercy of the sun and its schedule, as well as other forces of nature. Setting up studio gear though (no matter how simple) can give you much more control, putting light where it should be, dispersing the right amount of it, and having no fear of earth wind nor fire...unless of course you include hair fans and funky props. Nevertheless, studio lighting rocks, allowing you, an artist with a pallet comprising tech of all types, to photograph subjects as you see fit, on your own terms. But just like a painter who may select certain grades of brushes, or a sculptor with varying sharpness of blades and chisels, the lights you select for your photography work will set the stage for the story you tell in your product.

There are a number of lights to choose from, and I have my preferences. More importantly though is what they do. Sure, they emit light, and there are some issues like color temperature and what-not. But what I find to be of THE utmost importance are two things:

All too often, #2 is overlooked, but it's crucial. Depending on what you're shooting, flash duration can mean the difference between motion blur and tack-sharp images. In this blog. I'll briefly touch on this topic, showing tests I've run on 4 different types of lights, and how an inexpensive alternative can get you amazingly sharp shots.

First, the geeky science part of it (in brief). When shooting inside, if you have a low enough ISO (say, 100), and you use a high enough shutter speed and f-stop (say, 1/100 sec and f/5.6 or higher), if you didn't have a flash you'll shoot a picture of darkness. This is because there is not enough ambient light to be picked up by the camera, which is why we all use strobes indoors. Taking this simple concept now one step further, you could leave the shutter open for quite some time (especially in a dark room), and only the duration of the flash will determine how fast the shot is taken. For instance, if I were to shoot in total darkness and kept my shutter open for a few seconds, and during that time I fired a flash, that brief flash of light would capture the subject at the point in time that the flash fired. If the flash fired and only illuminated for 1/10000 of a second, it would be like using a shutter speed of 1/10000 of a second. If though the flash was illuminated for 1/300 or a second, then it would be like shooting at a slower shutter speed of 1/300 of a second. In other words, when not using any ambient light (only strobes), the duration of the flash determines the speed of the capture.

Thus, it becomes highly important to choose a strobe that has a short flash duration if you want to shoot fast. If you're using a tripod, have a steady hand, or have no movement in your subjects, flash duration is not such a big deal. For me though, I move around my clients very quickly, and my subjects are not always still -- I like to capture them laughing, or with hair blown, or in mid flex when doing fitness -- time is of the essence. So for what I typically shoot, I need a flash duration in the 1/500 to 1/1000 second range (at least), to make sure I freeze the subject and not get any motion blur (neither from my movements or my clients'). Consider also that after shooting for an hour, two, or three hours even, it's common to get a bit shaky as well. So for me, it's important that I use strobes that have very short flash durations to eliminate any chance of motion blur.

Almost every strobe out there -- monolights or speedlights -- specify their flash durations. If they don't, beware...they are likely embarrassingly slow. Also, the spec most often shown is what's known as a t0.5 rating, which is really just a nice way to fluff their results. The TRUE rating is what's known as t0.1. The t0.5 rating is how long it takes for the light to reach 50% decay after it flashes. But the t0.1 is how long it takes to decay all the way to 90%. For all intents and purposes, a t0.1 rating is the actual flash duration. For that reason I refer to the t0.1 rating, which is a more TRUE measure of flash duration. If a spec you're looking at doesn't say whether it's t0.5 or t0.1, then I'll bet you dollars-to-donuts it's a t0.5 rating. In this case, just divide by 3 and you'll get the t0.1. For instance, If you see a t0.5 (or unspecified) flash duration of 1/600 of a second, you can count on a flash duration of 1/200 of a second...way too slow for me, and most shooters I know.

Side bar: if you want to dig into more of the ins and outs of t0.5 and t0.1, click here for a great explanation by Paul Buff.

Another boring bit of light science before getting on with my test results: The flash duration varies by how much power is set on your strobe. For most monolights, the flash duration gets longer (slower) as you decrease power. If you use a speedlight though, it's just the opposite: the lower the power the shorter (faster) the flash duration. This is also the case with very few monolights, like the lightening fast Paul Buff Einsteins. These things are speed demons, and get way faster as you tone-down the power.

Moving past the science stuff and on with the test results: For my test of flash duration, I used a super simple setup shown below....yup, it's super simple and not too scientific, but it will work enough to prove the point of power, and duration of a flash: 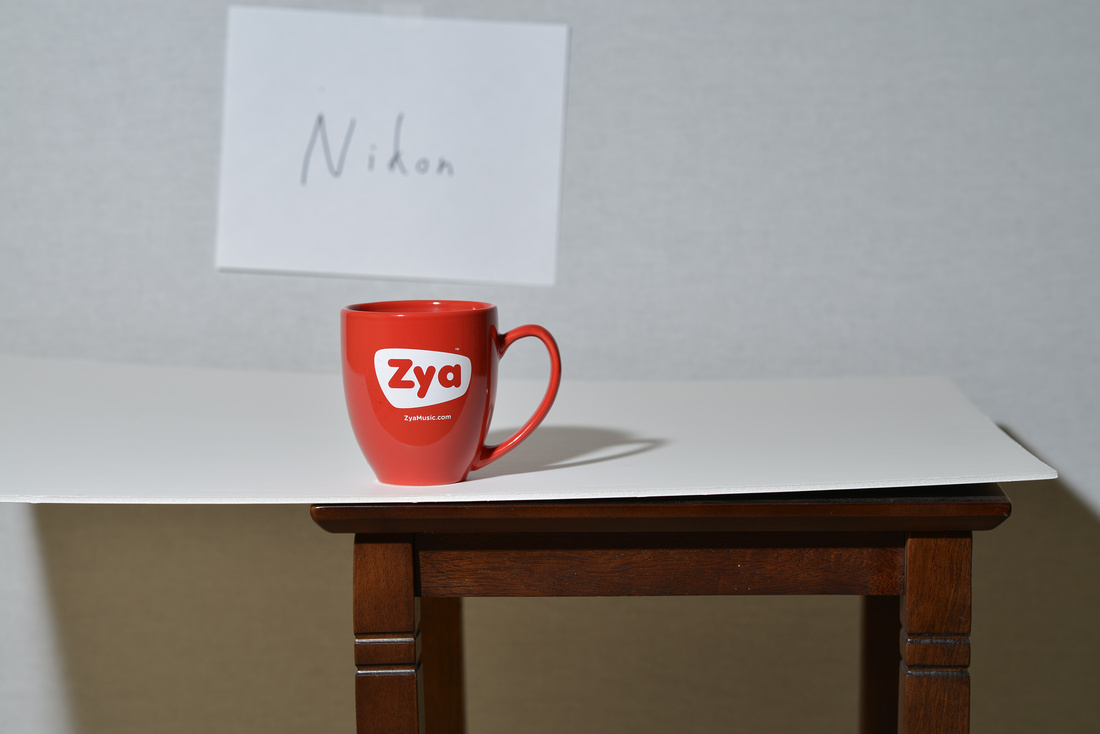 In my super simple setup above, I had a Nikon D600 with 85mm lens on a tripod firing a remote flash in manual mode. Using four different models of strobes, I would pull the white foam-core board to the right and fire the camera with a remote. I fired numerous shots to get at least an average amount of blur while trying to keep the motion at the same speed on each shot.

I used four different strobes in this test:

Below are the motion-blurry results, with each strobe set for f/8. Following that is another test I'll show ya that got sharper shots, and with results that may surprise you. First though, the motion blur at f/8: 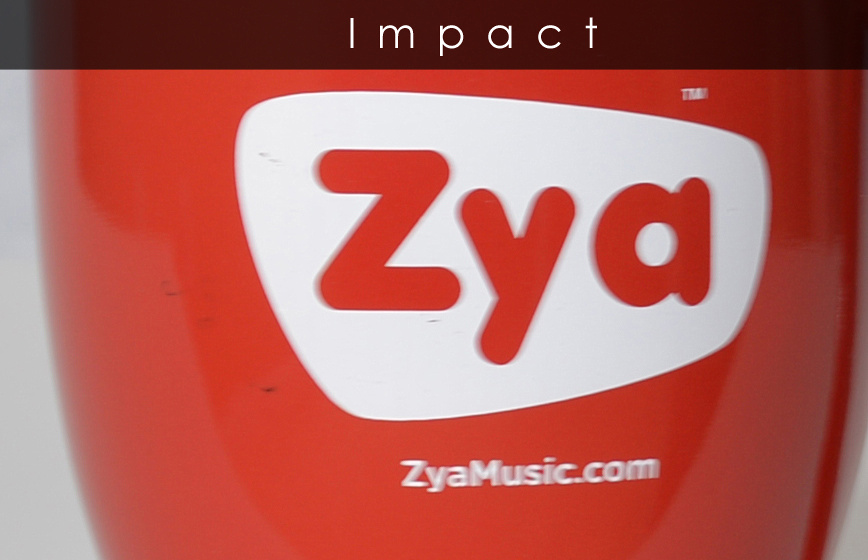 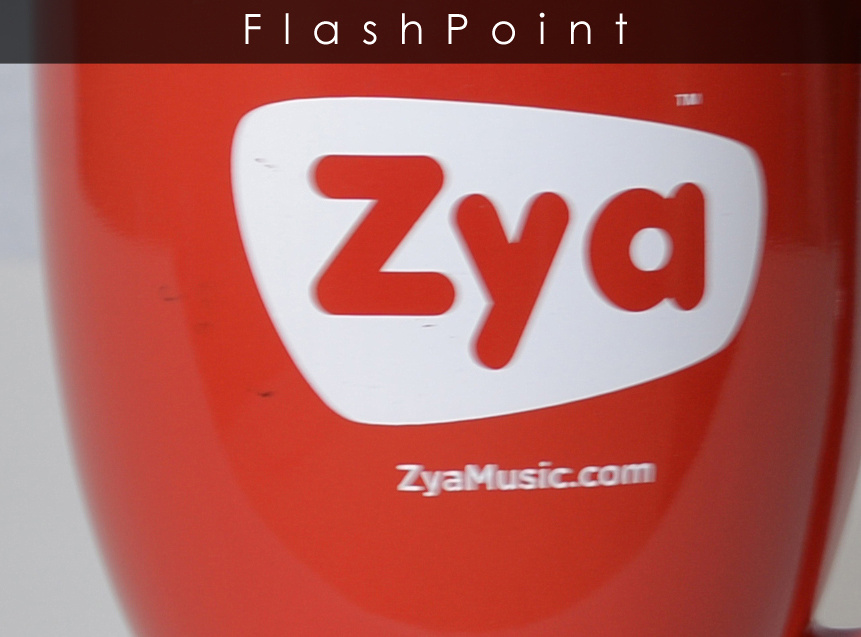 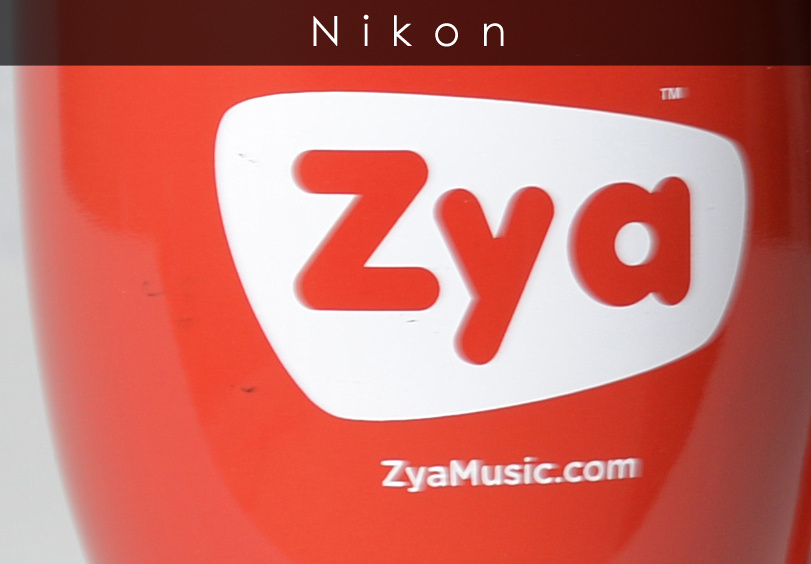 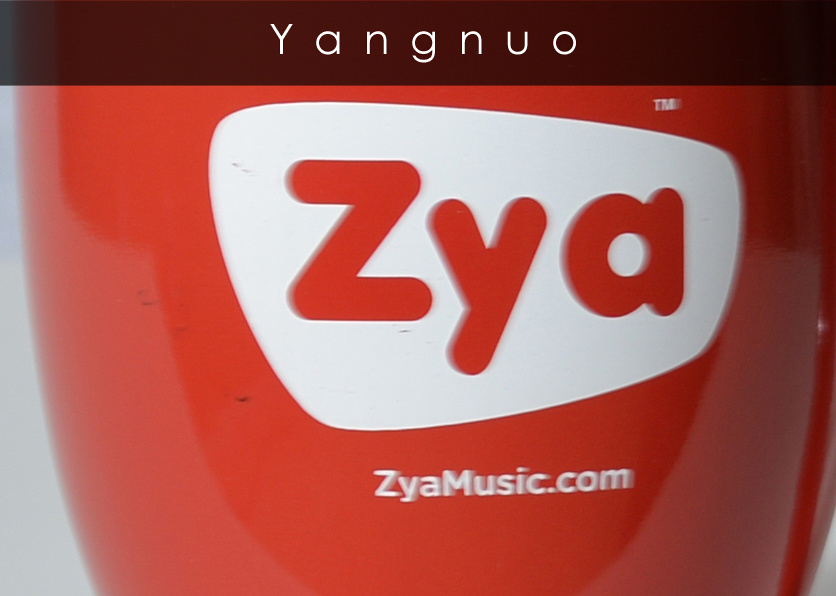 All of these shots have motion blur, but notice how there is less blur using the speedlights (Nikon and Yongnuo). But that's only 1/2 the story (literally). To get f/8, the speedlights had to be set to full power, and as you may recall from what I mentioned earlier, when it comes to speedlights, their longest durations are at the higher powers, meaning I can drop the power a stop and get faster flash duration for sharper shots -- here's proof:

This is the second test. The shots below used the same test technique (sliding that white foam core to the right to move the mug and induce motion), but the speedlights were each set to 1/2 power, thus speeding up their flash durations: 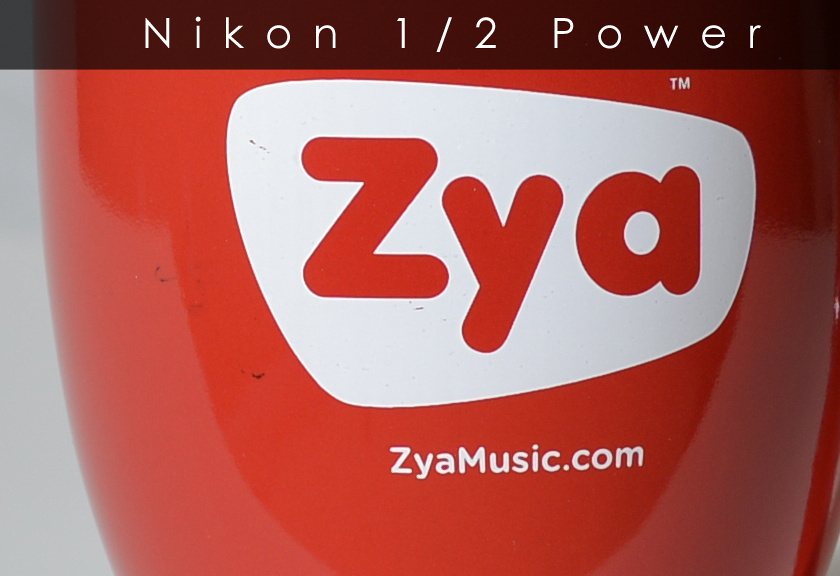 Notice that at half power on the speedlights these shots are way, way sharper. Since I halved the power, I opened the aperture one stop to f5.6, which is common in my portrait work (when going for semi-shallow depth of field). I could do the same thing though at f/8 by simply either moving the light closer, or bump up the ISO to 200 (going from ISO 100 to 200 is one stop of light). On a high ISO camera like the Nikon D600, going up to even 400 ISO would be no biggy, allowing me to take similar shots at f/11 (or better). If I had toned-down the monolights to f/5.6 though, it would have slowed their flash duration further, resulting in more blur. With the speedlights though, I got a super speedy flash duration.

Also bear in mind that this was with just one light. When I do portrait work, shooting at f/8 (or sometimes f/11), I'll still use ISO 100, but use multiple lights (usually just key, fill, hair, and background...1 each). And, if I'm shooting against a continuous white, there is so much light being bounced around that it's quite easy to use speedlights in softboxes and have plenty of light to spare (easily use 1/2 power and f/8). Either way, by using just inexpensive speedlights, I can stop action, making it less likely I'll get motion blur from hopping around the studio firing quick shots -- I can capture emotion with no worry of motion. As an example, the following shot used just two Nikon SB-700 speedlights at half power, shooting at ISO 100, f/8, and 1/100 sec, using these softboxes: 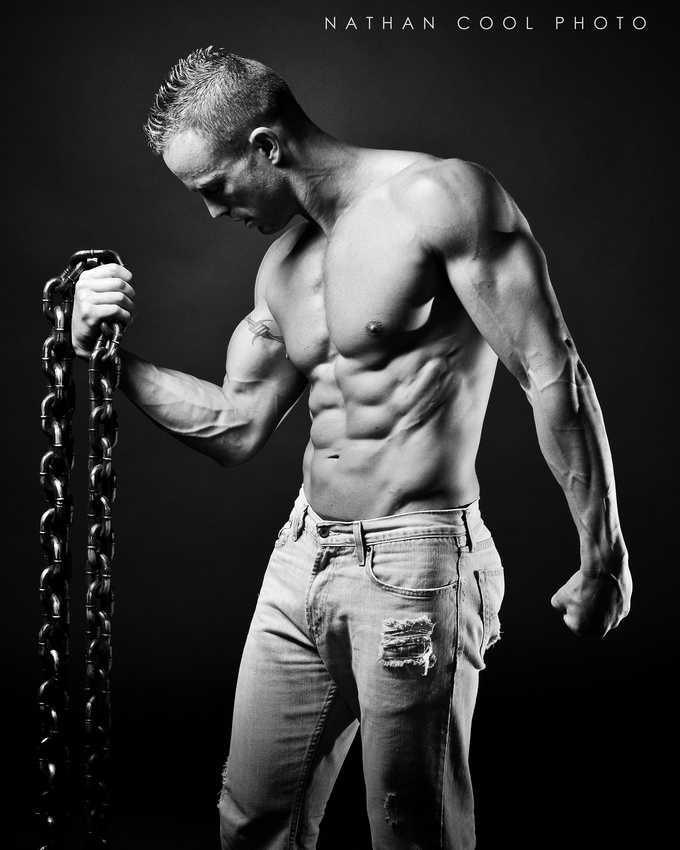 If you look closely, you can see the illuminated areas, like the abs, are super duper sharp, but the darkness near the bottom of the chains has a little motion blur -- proof once again how a fast speedlight can stop motion.

Speedlights though are not the end-all, be-all light. Monolights have huge advantages, including no need for tons of AA batteries, fast recycle times, and more variety in light modifiers. But speedlights, with their ease of portability, low price, and short flash duration, remain a strong contender in the land of photo lighting.

But what if you want a TON of light, AND a small aperture...say shooting at f/11 or greater on more than one person? Either you'd have to bring along a plethora of speedlights, or purchase a monolight with a fast flash duration. The Einstein I mentioned earlier is a great candidate for such a situation. But in many cases this may be overkill -- a Yangnou speedlight costs about $60, so you could by about 9 of those for the price of one Einstein. If you did though use a swarm of speedlights, you'd need to get creative with modifiers to diffuse all those lights, and of course bring along a bulk of AA batteries as well. Still, with all of these options, based on budget, need, and want, there are many choices available.

Like most technology choices, it really boils down to what kind of photography you need the lights for, and weigh all the choices for your particular needs. Hopefully my two cents can help with those decisions.