A simple trick to get blurry trails.

Doing a fair share of effects work, I sometimes get asked, "Is it Real, or is it Photoshopped?". Today there is a fine line between what the lens captures and what gets fiddled in the pixels. But with this particular shot of Zach Castro punishing that speed-bag, the answer is, "Yes, it's real". It's done using a trick called Shutter Drag that I'll share with you today.

Shutter Drag is something you can do with any kind of DSLR, even just using the built-in flash. In this picture, I used a single off-camera strobe triggered with a remote, but the effect can happen on any type of flash, as long as on your camera you can control shutter speed and aperture.

The effect from doing this Shutter Drag is the result of capturing two types of light: the first is obviously from the flash, but the second is simply just the ambient light in the room. The subjects in the photo (Zach and the bag) are captured from the flash, and the blur is from the ambient light. The secret to making this happen is to set your shutter and aperture to a setting that is just slightly above what is needed if you were to use just the ambient light, but most importantly, to make sure your shutter speed is slow...draggingly slow.

For instance: In this shot, I was shooting at about 200 ISO against a portable black backdrop that my lovely assistant, Christine, was holding in place for me (she's a wonderful woman and a great backdrop stand too:)). Some light was coming in from a window, and when using an aperture of f5.6, I needed about 1/15 sec. of shutter speed if I didn't use a flash. I then set the shutter speed to about 1/30 second, which forced the flash (in TTL mode) to expose the subjects, yet be slow enough of an exposure that some ambient light would be let in. After setting this up and Zach getting punchy, I started firing like mad. After about a dozen or so shots in continuous mode with Zach goin' nuts on that speed-bag, I got a few keepers, including this one.

What makes this work is the timing of events, which goes something like this:

1. I pressed the shutter, which opened it to let in light...no surprise there, that's what cameras do when you press the shutter. So far, so good.

2. The flash then went off...POOF...but the shutter is still open. It's at this moment that the subjects are lit up, and captured, but now the magic happens.

3. After some time, the shutter finally closes. The time between the flash going off and the shutter closing is when the ambient light comes in (the blurry trails of the speed-bag and Zach's left fist).

And then, viola! You have a picture of both flash AND ambient light.

Remember that a flash bursts its light at about 1/1000 of a second. That's fast enough to stop just about any motion. Shooting this shot at just 1/30 of a second allowed the shutter to remain open even after that fast burst of flash light went off...that's when the blur came into the picture.

This particular kind of shutter drag used what's also known as Front Curtain Synch, which means the flash went off right after the shutter opened. If you want the opposite trail effect, many cameras have what is known as Rear Curtain Synch, which means the flash goes off right before the shutter closes. Looking at this picture of Zach v. speed-bag, it looks as though the bag was going up and away from Zach; however, this was shot using Front Curtain Synch, so the trail/blur occurred AFTER the flash went off. So we have an additional illusion here, in that the speed-bag's trail is actually action that happened after the fact. Why did I do that instead of Rear Curtain Sycnh? I was just lazy and didn't want to change my flash settings :) 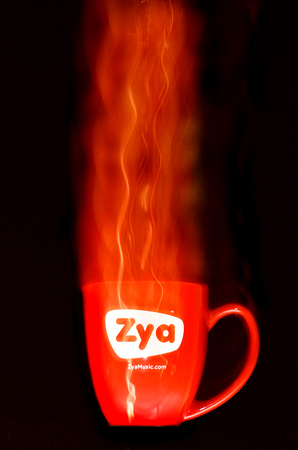 The shot of this fiery Zya mug used the similar technique, also using Front Curtain Synch (default in most DSLRs). In this shot I balanced the ambient and flash lighting, and shot the mug. I then dropped the camera to get the trails in the upper portion of the frame, which look like flames. Nope, the mug is not on fire, and nope, it's not Photoshopped. It's just another draggy shutter kind of shot.

So go give it a try! There's a world of possibilities out there. Remember, the flash will freeze the subjects and ambient light will catch the rest, just use a slow shutter speed and let light do the rest.