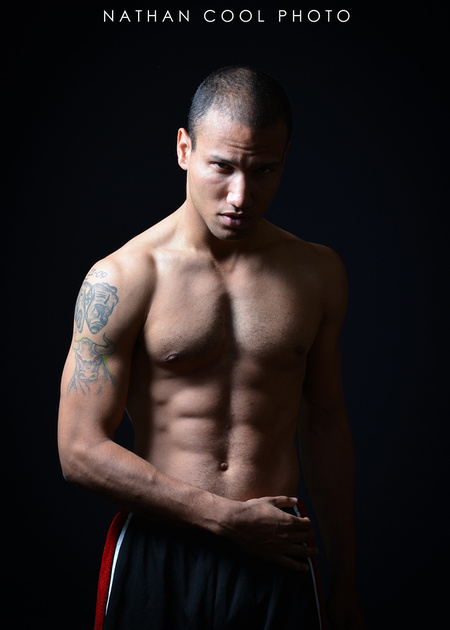 In my last blog (here), I talked about a way to add artistic punch to any picture using selective saturation. But while all of the black and white classes of photos show depth and character, it's really the spaces in-between that make the BIG difference; it's the shadows that make for mystery, placing a subject in a three dimensional display to reveal a subject's physique, character, place in time, feelings, emotions, and expressions. We as humans have learned to read the nuances that come with the three dimensions of space, but when a subject is flattened onto a 2D image, we need to fool the mind's eye into seeing what we naturally would have if that person would be right here with us. Shadows are key to making this happen, and I find there is almost no better way to accentuate these shadows than to use two special, yet easy to use, lighting techniques known as Feathering and Falloff.

I love shooting against a plain black background when doing fitness or other edgy kinds of shots. The black empty space acts as a void, leaving only the subject as a point of reference. All eyes are then drawn to the subject instead of a possibly distracting background feature or long cast shadows behind the subject. Don't get me wrong, there are times when background is paramount and the cast of a shadow tells a story as well. But if you want to draw 100% of the attention onto a single subject, then a black background does the trick. Using a black background also helps when working with shadowing the subject, as nothing else will be viewed: only the subject, molded into a three dimensional figure by areas of light and the shadowed void around and through them. Feathering and Falloff can make this happen, but shooting against black will really drive home deep meaning shown from the shadows.

Feathering is a simple technique of hitting the subject with only a portion of light. Take for instance the picture below: 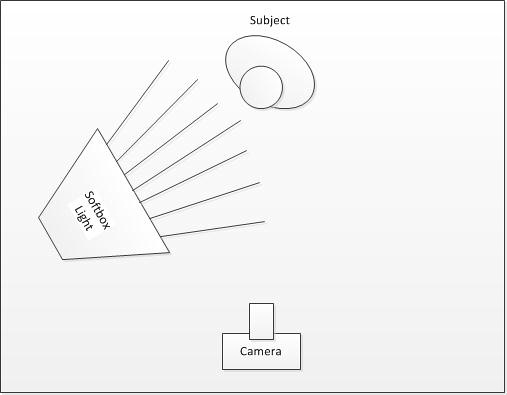 This diagram shows a common lighting setup using a softbox, which I use often to help provide a very soft, diffused yet amplified light when doing most portrait work. The setup shown in this diagram is often called loop lighting where the light source is projected directly at a subject at about a 45 degree angle from the camera. Although this is a commonly used technique, it only provides minimal shadows since light is blasted directly at the subject. In this setup, the subject, although turned slightly, is being hit with the bulk of the light.

Now let's take a look at the same setup slightly modified for feathered lighting, which is shown in the diagram below: 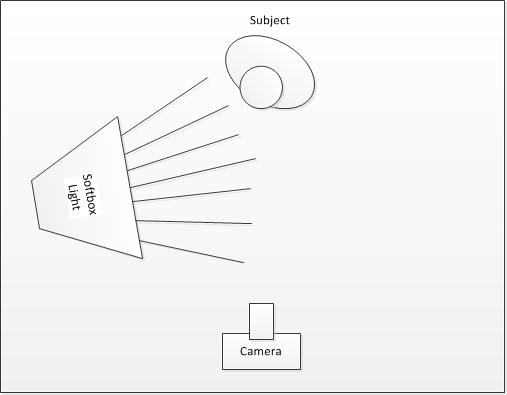 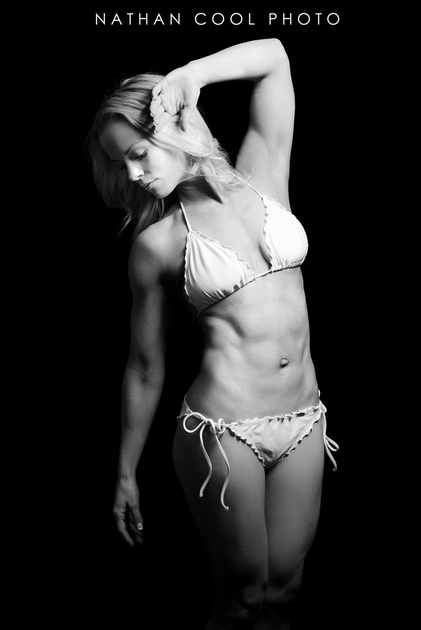 s (like from our sun), but as it does it loses intensity. This weakening though is not a steady loss; instead, light loses intensity by magnitudes over distance. This is known as The Inverse Square Law, which basically says that for every increment of distance (say, for every foot or inch), the light will weaken massively more than the previous increment of distance. Light is powerful coming out of its source, but weakens a whole heck of a lot as it travels away from its source. In other words, light falls off rapidly as it leaves its source.

You can use this property of light to your advantage by simply placing the light very close to your subject. Doing so will hit your subject with light that falls off quickly, placing only the part of the subject nearest to the light well lit, and the rest gradiating into darkness. In the shot taken to the left, I placed the subject only about a foot or so away from the light which was angled above her. As you can see, her left elbow is well lit, but the rest of her slides into shadows. Notice how this also affects muscle tone, especially in her abs.

2. Falloff: Areas of the subject close to the light are far more illuminated than those slightly farther away from the light.

So you wanna have some shadowy shots? Here then is the formula that I've found works well:

1. Shoot against a black background, and keep the subject about 3 feet from the background.

2. Angle your light source slightly away from the subject, and angle it from above.

3. Get your light source very close to the subject, ensuring the proper exposure for the part of the subject closest to the light.

Getting the shadows just right can be tricky. Anybody can point strobes directly at a subject and flood them with light. Whoop dee freakin' doo... To me, that's boring :) To me, a photograph is not a fraction of time captured in an image; instead, a photograph needs to tell a story, and shadows help make this happen. Getting shadows just right though takes time and patience, both for the photographer and the subject, especially when using multiple lights. If you've ever shot with me you know I tend to use a few different lights and reflectors as well.  I'll discuss the multi light setup at another time, but basically, no matter how many lights are used, the principles are the same for feathering and falloff: we simply want shadows, it just depends where, how deep, and what parts of the subject should be more visible than others, and where the spaces in-between will tell a story from a single click of the shutter.