How to get clean shots of any product. 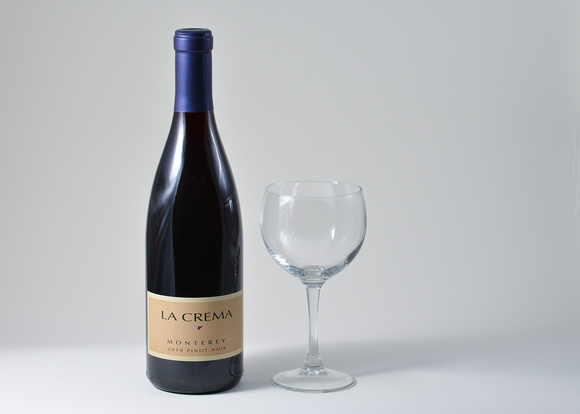 Products can sometimes be the hardest subjects to work with: they just stand there,  refuse to take direction, don't do their own makeup, and worst of all, tend to reflect dang-near anything around them. Many a photog before me has encountered the same problem, and there are secrets to getting these shots pristine, figured out long ago by many who have struggled with these inanimate objects and the chaotic lighting that comes with them. Here, I'll show you how I got this particular shot, and how I shoot similar products as well.

Glass can be a real pain to work with. Think of a mirror and prism all wrapped up into one curvy subject that will bounce light all over the freakin' place. Try shooting through an umbrella, and you'll see a bicycle wheel with spokes and a bright white tire in the subject...or an alien space ship, depending on how that Rorschach test pans out for ya. And, don't forget about light stands, reflectors, or even you showing up in the catchlights, forever captured in glass...a hidden subliminal message perhaps, or a nice way to hide your logo, but not really ideal for a client or anyone else admiring your work -- and not necessarily your equipment reflected in the subject being shot. 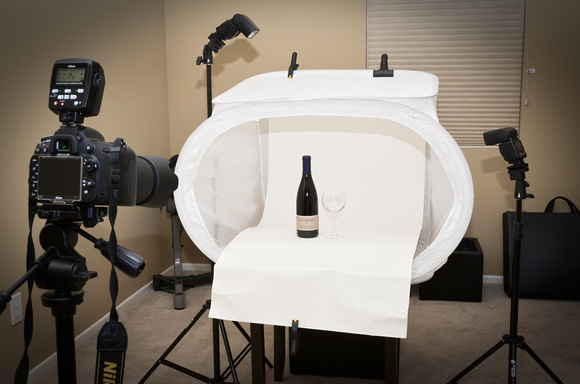 The biggest secret (well, not really sooo secret) to avoiding these reflective pitfalls is to use what's known as a product tent. I used a monster one shown here (which you can purchase here). Although called a product or photo tent, it's really just a big cube of translucent mylar material that you can set products inside of, and shoot strobes into from the outside. Like an umbrella or softbox, the product tent/cube is surrounded in not just diffuser material, but the mylar also acts as a reflector, bouncing diffused light softly around the subject inside.

Most product tents have various backdrops you can drape inside them, allowing for a continuous background. In this setup, I just clamped some white background paper to the inside top of the tent, and draped it down and out. In this case, I wanted to use a standard white paper, not bright white, thereby getting some grey and blue in the final product. Had I wanted to completely separate the subjects from the backdrop, I might have opted for just the plain white. Here though I can play more with shadows...and I love shadows. 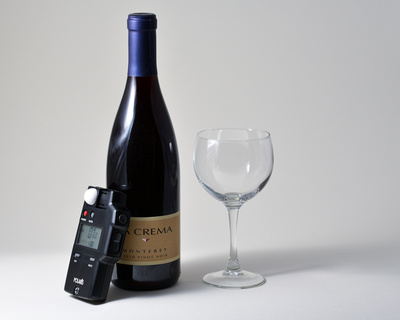 The product tent not only did a great job with the lighting, it also avoided most reflections from the room -- no light stands or me in the glass subjects. The tent also gave me free reign on how to position the lights around the tent. To get the shot lit just the way I wanted, I first hit the subjects with a light meter, shown in this shot to the right. Why use a light meter in today's day-and-age of TTL and other super fancy automation found in feature-rich DSLRs today? Simple: consistency...just set up once and forget about it, and keep shooting all day long. It might take 20 takes or more to get a shot lit the way you want, with the shadows, catchlights, and reflections just so, and often times you may shoot more than one product for an entire product line (think a bottle of Pinot, Zin, and Merlot for one winery during one shoot). Each time you shoot a frame and rely on TTL/automation, you leave it up the camera to compensate for what it thinks are shortcomings when you move a light to another location (which I'll show in a sec, to see more of what I mean).

So, for this setup, I placed my handy dandy Polaris meter right up against the bottle to read how much light would hit it. At a shutter speed of 1/60 at ISO 100 (yes, use a low ISO, don't mess with grain!), I metered until I got the aperture I was after, around f8, for the depth of field I was after. For this shot, I wanted just a tad bit of fill light (on the right), so I dialed in that light to really low (1/64th power on the strobe), and dropped my aperture to f9, thus getting just about the right amount of light across the entire scene, but with a slight bit of darkness to speak a story of red wine..something dark and evening-esque, perhaps on a table in a restaurant.

Anywhoooo...the point of the matter is that it's important to get consistency in the light settings: set up manual aperture, shutter speed, and ISO, and gauge it off a light meter. Make those settings, and stick with it from shot to shot. Once you have the lighting all dialed in, start playing around with moving the strobes to different locations; by using a product tent, it's now anything-goes with angling the lights (with maybe a few tweaks in power here and there). The magic now comes into the picture (pun well intended), as you can paint shadows anywhere on your scene while not worrying about tearing down and setting up all kinds of stands, clamps, and gear...or change settings. Instead, just move the strobes around the subject for various effects. For instance... 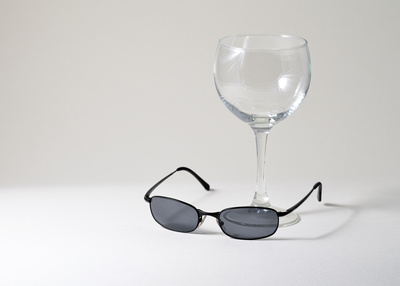 ...In this shot of the sunglasses and wine glass, I used identical lighting from the wine bottle shots. The key light is angled from the left side with just a slight bit of fill on the right. This has some neato shadows to the right, and has placed some weird (but I think cool) flash catchlights in the wine glass. 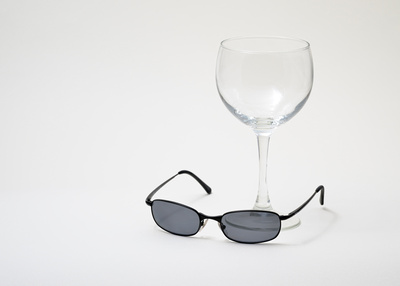 But now take a look at the picture to the right. In this shot, the key light was placed above the product tent, shooting down (like shown in the picture above showing the product tent and my lighting setup). This reduced some shadow, but more importantly, it changed the background to be a purer white color.

Shooting against a "white" background can give that grey-ish look to the picture, as was the case with the setups I used in this blog post. But the photo tents can also be really useful for shooting bright white as well, which can really separate the subjects. 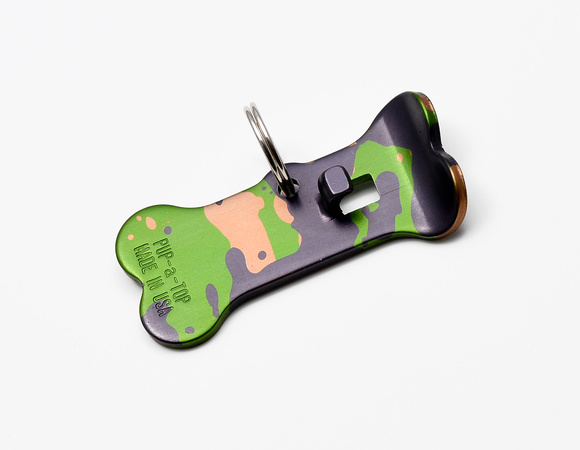 This image to the left is from a recent product shoot for PUPaTOP, showing their cool dog-tag-bottle-opener combo product (man's best friend, so to speak). In this kind of shot, there is very little need for deep shadows since it's just the product, and not a  story about it, that needs to be shown -- for catalog purchase purposes on their web site. And, since I'm not shooting glass, I'm not worried about getting greys and blues added to the subject and its surroundings. So in this case bright white backdrop paper was used, and the strobes were both positioned from up top, shooting down into the product tent. There is still some shadow, and the colors of the product are not glarey, as would be the case if this was shot straight on, and not diffused and softened from the tent/cube.

So there you have it: the secret to product picture success. All from a cube of translucent mylar for soft, even lighting, using consistent settings based on metering and not TTL, and experimenting with endless possibilities of light placements without fear of reflections or ghostly apparitions in your catchlights.

One thing though to emphasize, is that shadows always, in some form, are necessary for realism, and these tents can nearly eliminate them. Don't be afraid to let your shadows show. Remember that light shows the subject, but shadows tell its story.

Shoe Photography(non-registered)
Very good composition and nice photography.
Nathan Cool Photo
Good suggestion Wermut. I added EXIF at the bottom under the final image.
Wermut Thujone(non-registered)
Could you post the EXIF data of the raw image and then the post processing with your blog entries?
No comments posted.
Loading...
© Nathan Cool
Powered by ZENFOLIO User Agreement
Cancel
Continue