The battle over Monolights versus Speedlights. 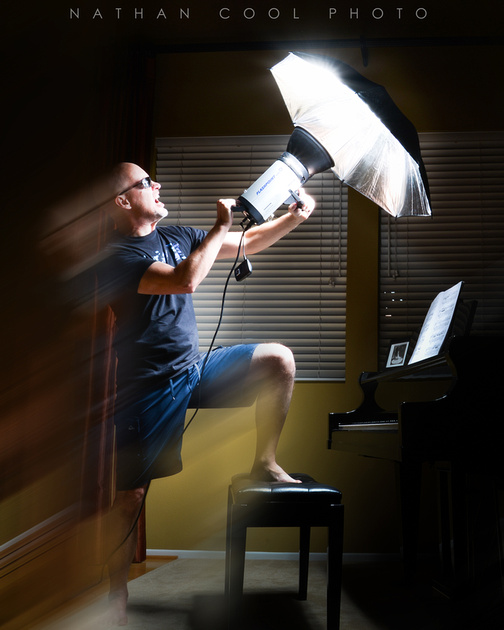 There's been a long, on-going, and often heated debate -- and sometimes personal struggle -- over which kind of flash works best: speedlights (like the ones I talked about in another blog post), or monolights, those bulky studio strobes, like the big mother sunner pictured with me to the right. There are definitely pros and cons to both, and each has their place and time. Today I'd like to call a truce on the battlefield of light wars by showing not just benefits of both options, but also reveal something that is dang-near difficult to find on the web or from manufacturers like Nikon and Canon: how much light difference is there between a studio strobe and a speedlight? The answer may surprise you.

Speedlights have come a long way over the years. Back in the old days of film (and delayed gratification), most speedlights were just called strobes, or simply on-camera flash. Sure, you could hook up a sync cable to the speedlight and your camera to take it off camera, but things really took off when speedlights became intelligent. When the automated, TTL features of speedlights came into being, shoots became quicker using speedlights: you just point, focus, and shoot...the camera and speedlight would work out all the nitty gritty details and flash the appropriate amount of light on your subject. And, with the advent of wireless remotes (both radio and infrared), and with tons of speedlight light-modifiers coming on the market (like softboxes, umbrellas, beauty dishes and more), speedlights started to take off as a great way to light things up, and burn through a shoot with less technical effort, and far few wires and weight.

But, no matter how far speedlights have come, they still have a few drawbacks:

So, by now you're probably asking yourself, "Why in the heck would anyone use speedlights?" There are a few good reasons I've found:

For me, the decision to use a monolight or speedlight boils down to the amount of light, and nothing else. If I can get enough light out of my speedlights, I'm all over it. If not, then I start to consider the monolight alternative. My go-to light is the speedlight. I buy batteries in bulk and they can be recycled safely; they are so lightweight that I can quickly move around light stands holding them on a shoot; there are just as many light modifiers as there are for monolights; and using a commander (like the SU-800), I can quickly control output. But when I need to pump out a lot of light, monolight is the way to go...but, only with the right monolight. Allow me to elaborate:

Many photogs getting into using monolights for the first time will tend to buy the budget friendly monolights rated at about 100-150 Ws (Watt Seconds, or simply put, the amount of light energy emitted). But are these more powerful than a speedlight? After all, that is my deciding factor on light of choice. The answer is: not always.

In my goofy light attack picture above, I'm holding a Flashpoint 620M monolight, which is rated at 300 Ws -- 2 to 3 times more powerful as the budget photo studio kits. This though is still just greasy kids stuff as other monolights easily go to 900 Ws, but they come at a cost. The 300 Ws Flashpoint 620M has a pretty good price point for the amount of light it can generate. To see how this 300 Ws monolight stacks up against speedlights, I ran some tests using a Nikon SB-700, the cheaper Yongnuo alernative and the Flashpoint 620M. Using a light meter, I set all three strobes to full power, without light modifiers, and wirelessly triggered each one separately to get a reading from about 8 feet away. Both speedlights ranked the same: at ISO 100 and 1/60 second, they metered at f/8. When firing the 300 Ws monolight though, it metered at f/16.

The difference between f/8 and f/16 is a HECK OF A LOT of light! In technical terms, that is 2 stops of light, or 4 times the amount of light. To put it in real-world terms, it would take 4 speedlights to give me the same light as one Flashpoint 620M. Now, you may be thinking, why then bother with speedlights? Aren't they too wimpy? My answer: no, it depends on what you're shooting. The conveniences of speedlights often outweigh the use of bulky monolights. And since so much of my work is done indoors on one or two subjects where I often go for a shallow depth of field, I'm totally fine at f8 or below; in fact, I shoot most of the time at f5.6 when doing portraits, sometimes just f4.

And, there is something else to consider: hybrid approaches. It's common to need a powerful monolight as your key light (primary light), but then use speedlights for fill. If I want to add splashes of light to backgrounds, hair, products, etc., then the use of one monolight with a few speedlights makes the setup for the shoot fairly painless: just one bulky monolight for the main light, and tons of simple, easier to maneuver speedlights to do the rest.

Lastly, consider also that my test was done using a fairly strong monolight, rated at 300 Ws.  But if you're buying the cheaper 100 Ws monolights, then for me at least, it'd be a waste of time (and money). Once again, my decision to not use speedlights is simply the amount of light -- so it's a Go Big or Go Speedlight kind of decision.

So there really is no battle over which kind of light to use (speedlight OR monolight). Instead, if you have both, then you merely open up more possibilities, having a more versatile set of tools to broaden your creativity.

Now get out there and shoot! ...with whatever light you find will illuminate your subject the best.