How to touch-up skin with a natural look.

Every magazine cover, every ad, every billboard, and just about every photo you'll ever see published has been edited. It's a controversial subject, since with the right software anyone can look like a completely different person, building false images of reality. I, like 99.99% of all photographers, use software to touch-up and make modifications to clients' photos. While I can take this to extremes, like in my Fantasy Portfolio, when it comes to standard work I like to keep things as real as possible while still showing clients in their best light. Case in point is this headshot of fitness model Sarah Parker, where just a few simple edits enhanced her picture while keeping her looking natural. In this article I'll reveal the edits used in post processing shots like this.

There are a number of tutorials on the web today that show myriad methods to apply skin softening, blemish correction, and more. Most though, I've found, will make the subject look surreal -- plastic skin with no texture, eyes with attractive but unnatural colors, and faces distorted to achieve the perfect look. Unless I'm working on surreal art, I (and my clients) prefer to keep things looking natural -- how the subject looks in the best possible light.

Below is a close-up of a before and after of the headshot I posted above. You can click on the image below for a bigger view. Here, I'll describe the steps I took in post processing to make this subject look their best. There are a number of steps involved, but I've found that if you want to make someone look their best, and not distort the entire photo, then taking many but small changes will make all the difference. 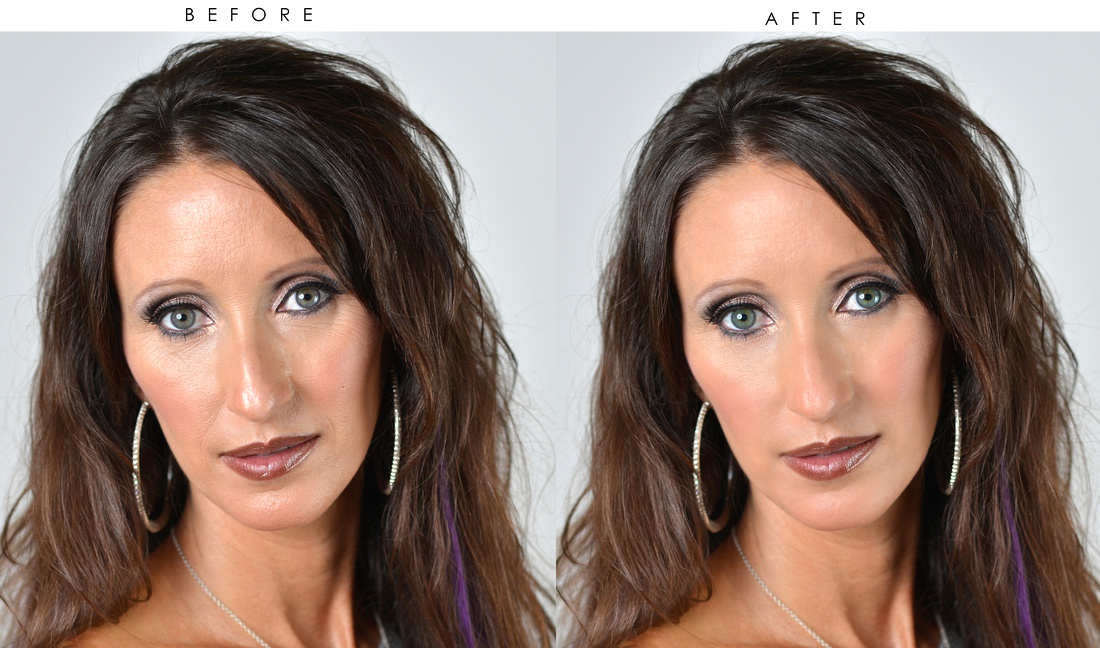 The first, obvious step in shooting this subject is to use good lighting, which in turn makes the post processing much simpler. Bad lighting can result in many more hours of editing, so a few extra minutes to get the light ideal can make my life a lot easier later. For this shot I used a 22" beauty dish with a diffuser for key lighting (camera left), and a double-diffused softbox for fill (camera right, angled low and almost 90 degrees from the subject). You can see the lighting angles by the catch-lights in her eyes. The combination of these two lights gave enough light to highlight the subject, but also to blow out many shadows in the face, which is a major step in softening skin and reducing the appearance of blemishes. But even with super soft light like this there are some things I wanted to correct:

None of these changes are anything all that out of the ordinary when the subject would be in their best possible light. In fact, when you think about it, these changes could have been done either with makeup and lighting tweaks, or in post processing. Nothing though should be any more unnatural. Here's how I did it:

Also, before starting any work in Photoshop, make sure you duplicate the original layer so you can save it as a backup for later.

One of the most common post processing steps in Photoshop is using the Yellow Channel. Google it and you'll find over 8 million results -- it's very popular and very effective. Here's a top-level overview:

If the Yellow Channel method of skin softening wasn't enough or just didn't do it well enough, there is another trick which I do often. In fact, I sometimes use both.

The next step is to correct wrinkles and blemishes. I used these steps to correct the crows feet near her eyes, the harsh laugh lines around her mouth, and that added reflection on her lower lip that looks like an indent.

A simple way to reduce the glare or shine on skin is to use a low opacity brush, once again in another layer, and using a mask.

There are a number of ways to enhance the eyes. For this shot I just enhanced the irises a tad, and here's how:

The last step is to just lighten the jaw a tad where there is some burning on her upper left jaw bone. You simply use the dodge tool to do this, but the trick is to what layer. You may want, at this point, to group the other layers together, or you could have also done this on your original layer (remember, you also have a backup layer in case you make a mistake). For this shot, I just used the dodge tool and hit her upper left jaw bone ever so lightly.

Also, experiment with various layers; for instance, I could have also added a layer called Hair, upped the sharpening a bit and maybe saturation, and then mask off just her hair. Or, I could have made another layer for levels, or curves, or other color adjustments, and once again (by now I'm sure you'll know what I'm gonna say) mask it off.

I realize all these steps may feel laborious for such small changes, but that's exactly the point: changes should not be extreme if you want your subject to look natural. Making broad sweeping changes to a photo is easy, but it likely won't look real. Making a subject look natural in post processing may be difficult, but if it was easy, then everyone would be doing it :)