Hidden Secrets in "Return to Paradise" 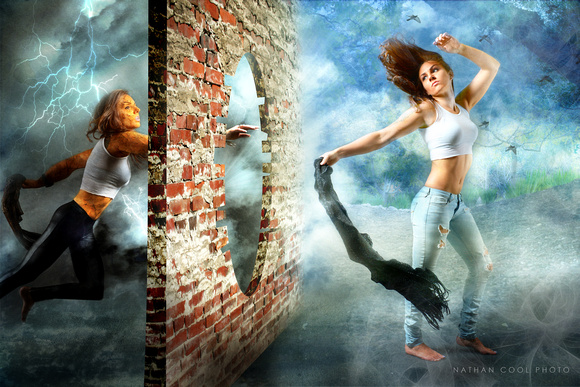 Back in September I shot fitness model Kim Houghton for a series called Levitation (see video here). In that series I captured Kim in a variety of motion poses to use in gallery art over time. One of those pieces, Return to Paradise, may look like a story of transition, but this piece also contains a number of subtle, hidden messages, which I'll share with you in this blog. (You can click the picture for a larger view.)

The first, more obvious meaning, was to convey the duality of human nature, from where we are, to where we wish we were. As a species, we never seem satisfied with the present, and continually concentrate on the future. This picture set out to defy that defect in human nature, and derail that train of thought with these hidden messages:

The Light: Defying the perception that things could be better, the light that is shining on Paradise (the right side of the wall) is actually coming from the darkness, from the "evil" or left side of the wall. I felt that it is our worst times that shed light on the best things in life; without sadness or heartache we'd have no reference point on happiness. Peace, happiness, and joy are merely relative emotions, and their origins lie in the darkness in life. Light thus shines from our darkest hours.

The Oak: Paradise Kim's left arm parallels a trunk of an oak tree, hidden in the background. The oak tree symbolizes strength, and its parallel position to Kim is literal: she too has strength, and is steadfast. I was originally going to place an oak paralleling her body, but thought the angle on this trunk, paralleling her arm, added drama to this piece.

The Birds: The birds in Paradise simply symbolize freedom, with their escape to remain as far away from darkness as possible. The birds are smart :)

The Hair: If you study this picture closely, you may realize that Paradise Kim's hair is being "pulled" toward the vortex/wall. Although she is in Paradise, there is a constant and strong temptation to return to the darkness. I used this shot of Kim in this position to symbolize addiction, and the human ability to overcome it. Whether it be drugs, alcohol, toxic relationships, bad habits, laziness, etc., we all are victims of temptations from our past; it is our strength that keeps us from returning to them. Paradise Kim is moving farther away from darkness (note the left bent knee), but there is a part of her being pulled to her past.

The Wall: The hole in the way serves as a vortex and transition between good and evil. The wall though is not continuous, and although seems to extend into oblivion, does not. This was to show the irony of how sometimes simple things keep us constrained, where in reality, escape and/or change are easier than we sometimes make them out to be: Evil Kim could just pass around the wall a few feet on either side of her, but instead is drawn to what she immediately sees.

The Scarf: The scarves were used in many shots from the shoot with Kim. I wanted to use this particular shot to show Evil Kim reaching for something Paradise Kim possesses and willing to share -- as Paradise Kim reaches for her evil doppelganger on the other side of the wall, willing to help, she remains steadfast (see The Oak above) while overcoming temptation (see The Hair above).

The Skin: The skin on Evil Kim is yellowed, aged, cracked, and breaking apart (and her hair is disheveled). This was to accentuate the difficulty of living in the darkness, and the physical toll that stress can have.

And there you have it, the subtle, hidden meanings in "Return to Paradise". I hope you enjoyed this piece, and that it can bring light into your darkest day. 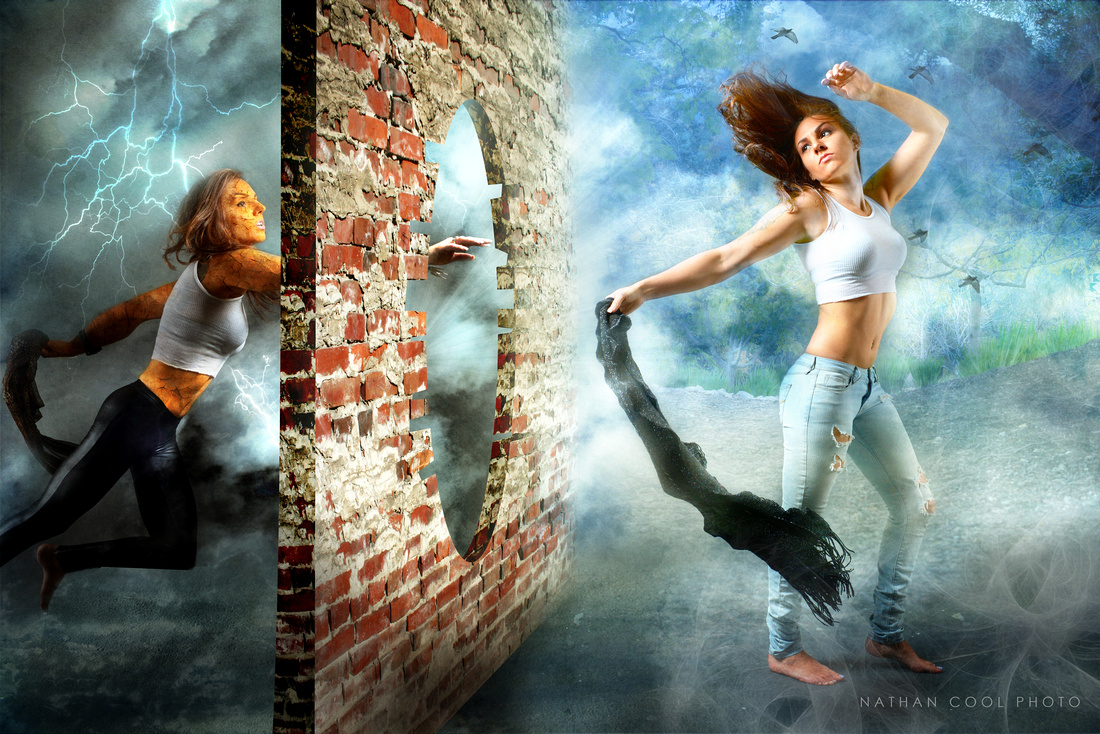