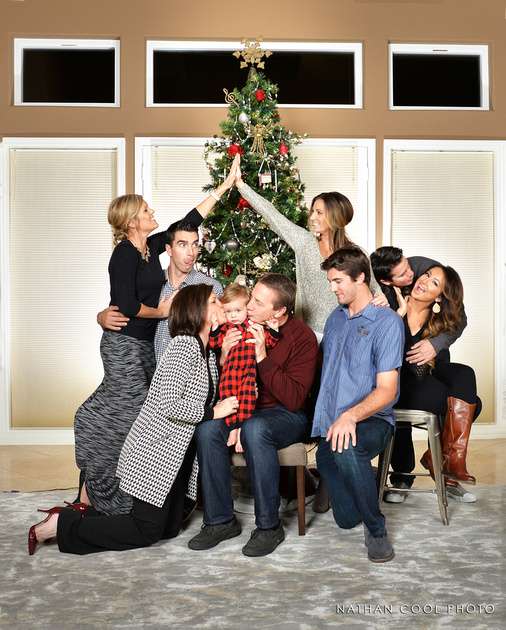 Whether you're using a cellphone or high end gear, there are some simple tricks to help get some great pictures this holiday season. This is also an extremely busy time of year, so I'll get right to it:

If you wait too long, moods will change. The best holiday picture is always the one where everyone is smiling "naturally" and having a great time. Snap fast, and remember tip number 2...

I doubt you'll be using film, so memory is cheap and there is no cost for development. Take tons of shots. Don't wait for everyone to be perfectly lined up, and as you're taking the shots, remember tip number 3...

As you're setting up the shot and while you're clicking away, keep the mood high, joke with everyone, laugh, keep the spirits bright.

If you shoot too low, you'll get double chins. If you shoot too high, the perspective will be off. If you shoot directly at eye level, you can get a nice effect of the subject interacting with those viewing the pictures later. But if you position just a smidge above eye level, you'll get that same interacting effect, but also stretch out necks a tad to avoid overdoing double chins. Remember that when people laugh or smile, they tend to tuck their chins...don't tell them not to, just shoot slightly higher than their eyes and it will help to even it out.

5. Shade is your friend

As are clouds. Don't shoot in direct sunlight, just move people into the shade if shooting outside. And, if nature cooperates, don't fret a cloudy day, that's when light will be exceptionally soft.

6. If possible, use a tripod  indoors

If you're shooting indoors and you don't have studio lighting, you just have to worry about your shutter being open too long, which isn't a problem if your camera is steady.

7. Or, bounce your flash indoors

Another simple trick if you're shooting indoors, and you do have a flash (with a swivel head), bounce the light against a wall or ceiling, or something else that is white. No swivel head flash, just an on-camera one? No problem...tip #8...

If you're using a flash, try to diffuse it. If you're using a swivel head flash, then use the white diffuser dome that came with it. No swivel head flash or diffuser dome? No problem, place a piece or two of tissue paper over the flash, but remember your light will be a tad weaker. On-camera flashes are harsh, so anything you can do to soften the light will help immensely (bouncing the light off a wall, or diffusing it).

Everyone's spirits will be higher if you can let them be themselves, and especially if they're allowed to be goofy. Get creative, and take TONS of pictures...you never know which one will turn out incredibly awesome!

10. For children, prep the set

Kids can't sit still for long, so it's best to just setup your shot before hand, and then have them move into the picture for a few quick snaps. Think about the shots before you engage them, and think about having some Christmas toys for them to play with. Also, when working with kids, have someone stand behind you and when you're ready to take the shot, have that person grab the kids' attention and get them to laugh (make funny faces and sounds, shake a toy, and just be a big ole goofball).

So what are you waiting for? Grab your camera and capture some holiday memories! 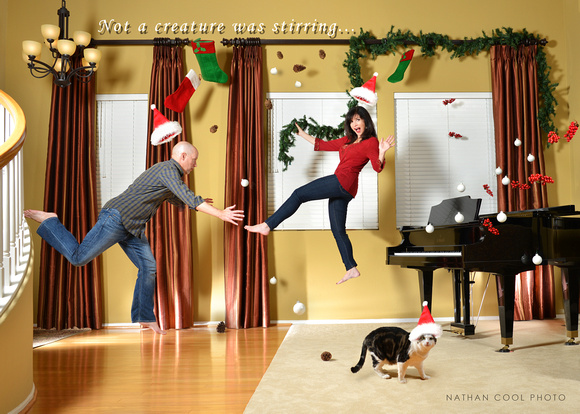