What Fantasy Photos look like before and after they get Photoshopped.

Ever wonder what my Fantasy shots looked like before they got edited? Then I think you'll like this short video I put together, as well as a short discussion about the techniques below:

The main ingredient in the making of each Fantasy shot is to get lots of footage, and to use a plain background. In the old days, a green-screen was often used, but I prefer using a plain colored backdrop when possible. This serves dual purposes:

Fantasy shots have a variety of techniques applied to them: cutouts, adding wings or other objects, adding abs or increasing muscle, and more. All of these though have two things in common:

Layers can also be adjusted in many ways. In particular, I concentrate on the blending mode and opacity. This allows me to use say a piece of meat as a layer, but blend it onto skin as an overlay, like in the picture below. 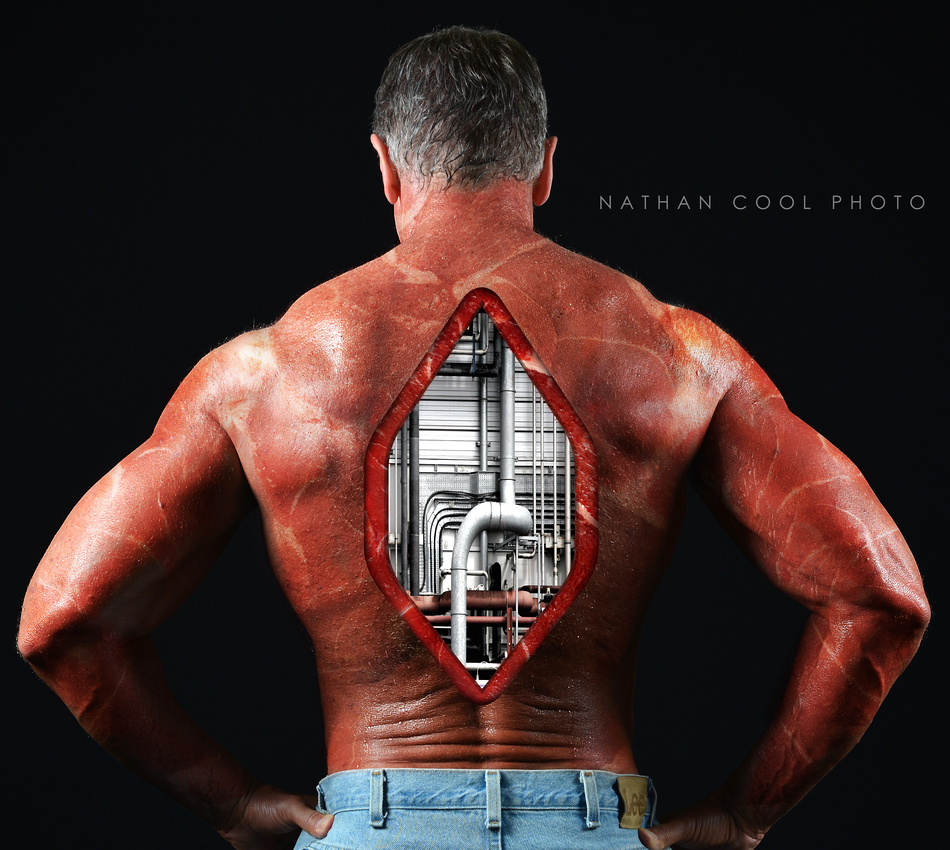 So grabbing a shot of a steak, I can use it as a layer above the main subject as an overlay, and using a layer mask I can paint it on where I'd like it.

The cutouts, deeper meat, and pipes are all different layers as well. But notice the 3-D effect -- that's also from other layers. Between the skin and deep meat there is a layer where I painted some black, then set the opacity to about 50% to add the shadow. Also, the depth of the meat is a series of layers with similar techniques.

In all, the picture above was comprised of 12 layers, which also included some adjustment layers (for levels, colors, and saturation).

Lastly, a big help in all of this is something to help me paint. Working on shots like these using a mouse can drive you batty (hmmm...almost made a funny there...something about winged mice...but I digress). Instead of using a mouse, I use a Wacom Pen Tablet. This allows me to sit back and draw as though I had a paintbrush or pen in my hand. Also, these kinds of drawing tablets are pressure sensitive, making brushes in Photoshop react as though I were lightly or heavily brushing an object.

Have a fantasy that you'd like to make into reality? Give me a shout, let's shoot, and turn your dreams into art.