Behind the scenes of the Independence Day shoot with Sarah Parker 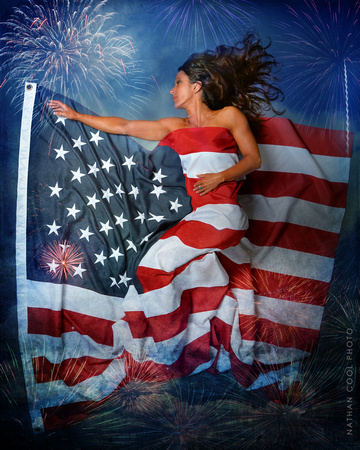 I'd been wanting to do something for the 4th of July this year, so I ordered a couple flags and planned some shots to take with a female model. Sarah Parker was up for the challenge (and available that week), and although she was exhausted from a recent fitness competition, she brought her A-game to the shoot and pulled it off like a pro. Setup was minimal, but it took over 2 hours to get the few shots we were after. Here's how we did it.

If you want to jump ahead, check out the BTS video here.

By the way, if you're wondering about the flag touching the ground (as I was for this shoot) it actually is an urban legend that the flag be burned if it does. The U.S. Code states that "while displaying the flag" it shouldn't touch the ground beneath it. I felt it respectful, in this shoot, to show the freedom and beauty of America, and how our rights and freedoms extend beyond repressed societies. Instead, we can express ourselves to the extent where beauty is not restrained. I'm grateful to those who've fought for these freedoms.

With that said, let's get down to business...

For this first shot, props go out to Marcella, another model who sent me this idea. Marci wasn't available in time for the 4th shoot, but we'll be shooting shortly...stay tuned for that! You may though have seen similar shots where it looks like the person is flying, but in reality they are laying on the floor. I did the same for this shot, and here is the behind the scenes, and finished shot:

At first, it sounded easy: just have Sarah lie on the floor, and shoot her from above. Easier said than done. I shot this (like I do most of my work) in my house, and luckily I have tall ceilings. But I only had a 6' ladder, which meant I had to use a focal length of about 28mm for this. Right after this shot, I went out and bought the Nikon 28mm f1.8 prime (I live on primes...high quality, lightweight, and not as expensive as the same all-in-ones). In any case, I had Sarah lay on thunder-gray background paper (which we used for the entire shoot), and getting high on my ladder I reached out and fired a ton of shots on auto-focus at f8, moving the camera slightly each time in hopes that at least one shot would be composed well enough to edit. For lighting, one softbox was to camera left pointed towards her head, another weaker fill in a softbox near her feet, and then one with a grid for spot pointing at her hair (look closely at the before shot and follow the power cords to where the lightstands are).

The next shot was less hazardous from my part, but required a ton of trial and error:

My cameo appearance in the before-shot on the left pretty much gives it away. I had Sarah pose and use slight variations in each shot. I then would grab the end of the flag, throw it up, and then click a remote shutter (the camera was on a tripod). It took tons of tries to get the flag flowing the way we liked it, while having a nice pose to work with. I used Nikon's 50mm f1.4 prime on this, a great lens for color and clarity (did I mention I looooooove prime lenses?). For lighting, two softboxes were used, a key facing Sarah, and a fill on the flag but almost perpendicular to the backdrop. BUT...what really was important for this shot (besides patience) was to use fast lights. I used Paul Buff Einsteins, which, when fired at this power (for f8), fired at about 1/5000 second, freezing the flag in midair, sharp as a tack.

The next one is pretty much a no-brainer, but I wanted to do more than just a plain background, so I setup mood lighting and changed the background in post:

The key to this shot was to use the thunder gray background paper. As with most of my fantasy shots, I don't "cut" the subjects from one picture to another, but instead, in Photoshop, use Overlay or Soft-Light layer blending. Using a picture of peeling wall paint as an overlay layer allowed the thunder gray blue tones to come through, keeping the colors as I had imagined, and making the blending a piece of cake. For instance, click on the finished pic on the right above, and see how Sarah's hair is preserved...that's the difference of using overlays versus cut-outs.

Lastly, if you haven't had a chance to see the video from this shoot, now's your chance: