The Making of the Mathematica Series 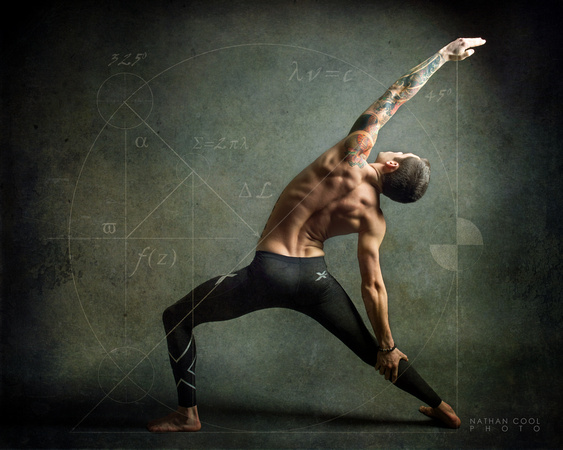 I was always impressed with how math imitates not just art, but also the human form. Photographic composition works on certain mathematical laws, like the rule of thirds and the golden spiral. But the human form goes far beyond these guidelines for composition, and can be seen through simple and advanced mathematics.

I admit that I am no mathematical genius, merely a numeric enthusiast with a smidgen of engineering background. But with some research and planning, I was able to work with Zach Castro (and other local models) to capture the human form in a formulaic way.

Here I'd like to explain how I took these shots, as well as a description of the math that they represent. Click on any of these pictures to see a larger size. 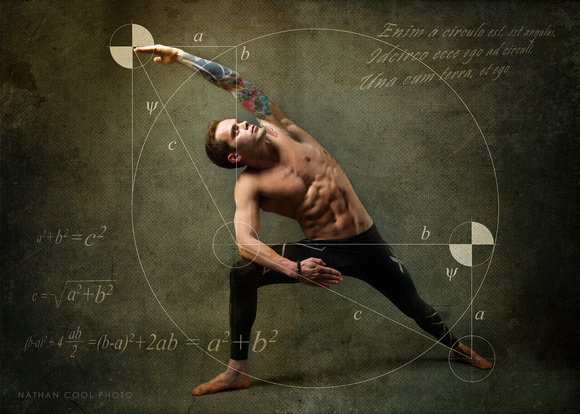 Basic Trig. One of the first shots I took in this series shows the angular relationships of the human form using basic trigonometry. Here the formula for the Pythagorean Theorem is used to show the relationship of right triangles.

This picture was the first one created for the Mathematica series, and I wanted to add some notation for the Da Vinci kind of feel. The Latin in the top right roughly reads:

This and other shots for this series were shot using a tripod...something I rarely do for portraiture. In this case though, the trick was to move the model slowly through the poses, shooting multiple times until one of the shots had the angles and alignment I was after. 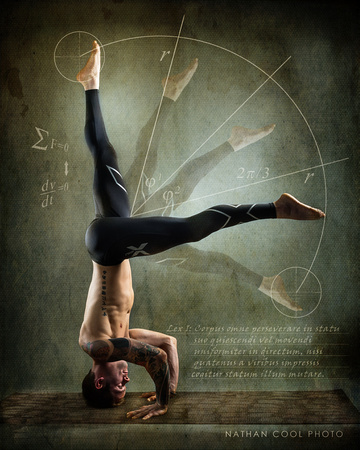 Newton's First Law. I was on a role with not just math, but also a Latin translator, so more Latin was added to this shot as well.

This series would just not be complete if it didn't include some kind of motion formulas, so Newton's First Law it is. This is that law that roughly states that, "...a body in motion remains in motion..." although that's not exactly how the Latin translates. Instead, the Latin for Newton's First Law (Lex 1) is:

"Every body persists in its state of being at rest or of moving uniformly straight forward, except insofar as it is compelled to change its state by force impressed"

Close enough :) Luckily, Newton wrote that in Latin, so I just had to copy his original text and pasted into this shot. The arc isn't related to this Law, but does show formulas for calculating the area within an arc. The arc also represents the motion of the subject's legs, and we took multiple shots of his right leg in motion. Those, from other shots, were composited in during post processing. 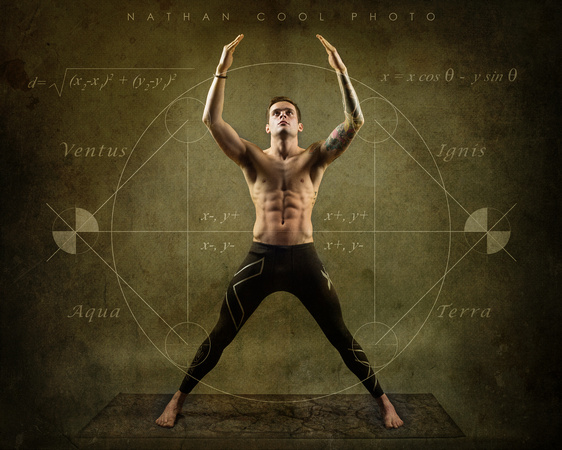 The Four Elements. This was one area that I was more familiar with, using the 4 quadrant Cartesian Plane many moons ago. Using these four quadrants I was able to represent not just the 4 human limbs, but the four basic elements of life.

In this case, the four elements are:

This shot also elaborates on the 4 quadrants to display squares. There are actually two squares, with one rotated 45 degrees. By placing datum marks on the corners of the two squares, I was able to show symmetrical relationship to the limb joints, between elbows and knees. There is also an implied circle in the shape of the arms, representing the 4 elements as being whole. 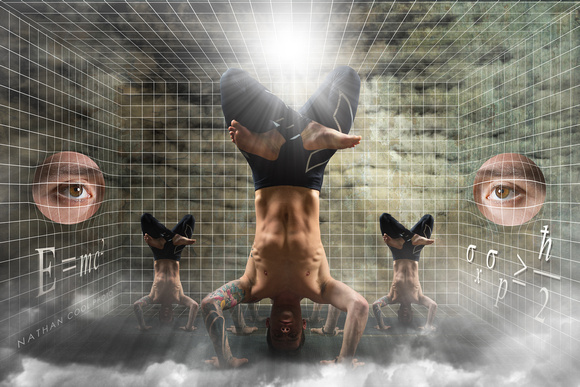 The Theory of Everything. Einstein's general relativity meets quantum mechanics. This was been the bane of physicists for decades, and still, to this day, the two schools of though cannot converge, leaving our universe a mystery in so many ways.

In this picture I show my concept of what happens at a point in the universe where these two conflicting theories collide. On the left is Einstein's familiar formula. On the right is the Heisenberg Uncertainty Principle. That's the familiar h in the formula. I could have grabbed a variety of formulas to represent quantum physics, but I had recently watched Breaking Bad, and just couldn't resist! The multiplicity of the model was to represent rips in space time, and the eyes a view from each theory. The shining light is where it all comes together, both schools of thought in perfect harmony; hence, the yoga pose to represent peace, and a state of rest. 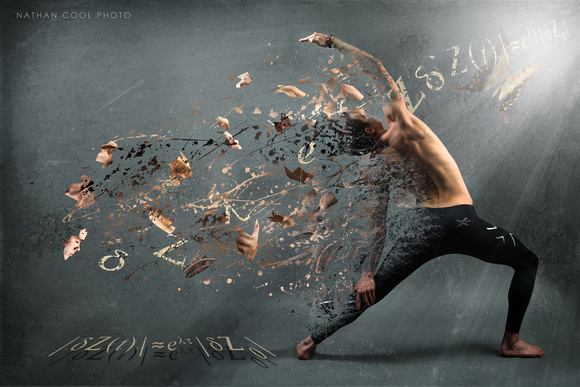 Chaos Theory. I love doing dispersion technique (where the subject falls apart) and I couldn't think of a better place to do that than this picture, showing a principle of chaos theory, also known as The Butterfly Effect; hence, the butterfly in the upper right of the picture.

In this picture, the formula is known as The Lyapunov Exponent, which I admit I know absolutely nothing about :) I just saw this formula while researching chaos theory, and thought it looked cool. If you look closely though, you'll notice the formula in two places, first on the ground, in its stable state, and also colliding with the model, which throws the formula and the subject into a state of chaos. By displaying the formula in two places, I wanted to portray that there are multiple states of existence, and that order and chaos can coexist. 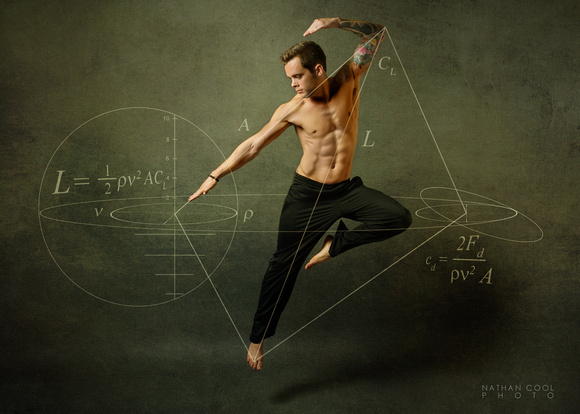 Principles of Flight. I love using my high speed action strobes (Einsteins by Paul C. Buff), and in this shot I used an equivalent of 1/5000 sec to capture the model in frozen motion.

This was a tiring shoot for the model where I had the model jump a bazillion times, each time coaching the next jump with a tweak: raise the arm a tad next time, make sure you point your left toes, bend at the hip slightly next time...etc. Lucky for me, this model (Zach Castro) thrives on perfection, and is an extremely hard working and patient model to work with. 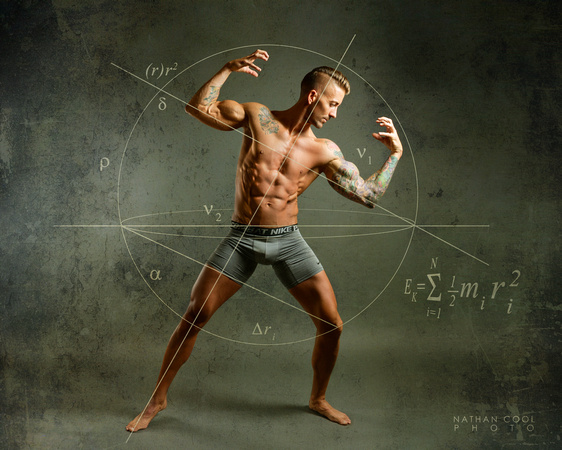 The Moment of Inertia. This time using a different model, I was able to work in formulas using rotation as a guide. His physique is more Atlas-esque, making anything that implies a globe resonate with historic images. If you take a second look, you may notice how this looks like Atlas holding the world on his back.

In this picture, I used the formula for the moment of inertia, in particular, around an axis (think of momentum of this subject as he tilts and rotates, with the implied weight of the world on his back).

Similar to the Principles of Flight, I wanted to show a 3-dimensional space around a sphere, thus depicting how these laws of nature work not just on 2-dimensional paper, but in our world and universe.

Lining up a model for this kind of shot is fairly easy, since unlike Principles of Flight, there isn't a lot of jumping around. Instead, it was a matter of merely coaching arm and hand placement. The other dimensions are natural to the human form, so the circles and other bisecting lines were just fell into place.

There's a whole world of math out there, and so many photos that can represent it. To see more of these and other works of mine, you can follow me on Facebook where you can also stay updated on offers, tips, tricks, and other fun photo stuff.